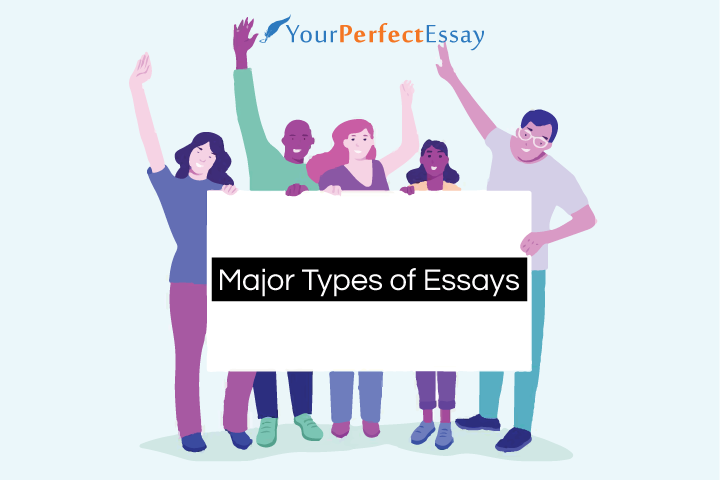 Did you know the word essay is derived from a Latin word ‘exagium’ which means to present one’s case? This shows that an essay is a piece of writing which depicts a person’s point of view or perspective of a story.

As there can be a thousand ways to narrate your story to a friend or family, there are numerous types of essays as well.

This blog will help you to understand all the major types of essays and have a strong grip on all of them, it will eventually help you to write any type of essay perfectly.

To succeed at school or college one needs to be aware of the types of essays around him/her. As almost every field requires essay writing in one form or another, so in this blog we will discuss and focus on the various types of essays in order to familiarize our readers with the variations in essay writing.

Essays have a lot of types but there are only five types that are commonly used worldwide. These types have been described below

The capability to brainstorm your feelings, embellish them with the five senses which are taste, smell, vision, touch and hearing makes a descriptive essay impactful.

For instance, if you are writing about pizza, make your reader crave it. Try connecting to the readers by tapping their emotional reservoir.

Moreover, do not forget to organize and structure the points in a coherent and logical manner to make your reader walk through your memory lane in a vivid way.

A city I got lost in

Similar to a five paragraph essay, a narrative essay is an essay which focuses on a single motif around which all the happenings or incidents orbit around.

It is similar to telling a story.

We all are memory hoarders and want to recount those reminiscences in a clear way, for this purpose it is the finest choice to write a narrative essay.

The main point of a narrative essay is stated in the first paragraph which is supported by concise details of the incident, vivid verbs and dialogues as well.

Do not forget to find a generalization so that it becomes relatable for the readers.

Readers get hooked on a piece of writing if they see their real life stories being depicted in it, so try to be as relatable as possible in a narrative essay.

An early memory about reading or writing

We have all faced scenarios where our habits were compared to our friend’s bad habits or our qualities contrasted to our relative’s qualities.

In simpler words, to compare is to evaluate the similarities between two topics and to contrast is to state the differences.

The best way to write a compare and contrast essay is to write on topics that are interconnected to make an essay meaningful.

Remember to use transitions such as likewise, nonetheless, both etc. to create a contrast and comparison effect in your essay.

In a compare and contrast essay, the writer sheds light on the uncommon similarities or differences rather than the subtle ones to create awareness in the reader’s mind.

A compare and contrast essay is written on two or more objects in which the writer can present information in two ways.

All the information regarding one of the objects being compared or contrasted is mentioned in first paragraph and the second object’s information is stated in the second paragraph.

In this type of structure each difference or similarity of one object is tagged along with the similarity or difference of another object. The points are contrasted or compared at every stage rather than in two different paragraphs.

The world is full of facts and figures but why do we still find it hard to prove our point?

The reason is the credibility of facts and figures. In an argumentative essay, the writer uses convincing techniques to persuade or convince the reader that his/her point is more valid than others.

A persuasive essay begins with a well defined thesis statement, introduction of the main topic, supporting evidence and ends with a logical conclusion.

This essay is also known as an argumentative essay.

The three reasons behind writing a persuasive essay are mentioned below

1. To convince the readers that by accepting the writer’s point of view the world will benefit from it.

2. To convince the readers that by not accepting the writer’s point of view the world will suffer from its disadvantages

3. To convince the readers that there is a terrible need to take action

Learn how to write an argumentative essay and practice it practically to enhance your skills and get better grades in your subject.

Why it is better to be moral than immoral

Writing an essay including a type of argument or claim about an object, issue or an idea you are analysing is called an analytical essay. It is also the key to write an argumentative or synthesis essay.

A piece of information undergoes the writer’s analytical techniques.

The main issue is subdivided into parts and the writer supports his/her stance with an evidence which means that the writer puts forward a claim and then analyses it thoroughly throughout the essay to prove his/her point.

Shedding light on the subtopics of a text to analyse or examine the whole text is main technique used in an analytical essay.

Therefore, an analytical essay provides a narrow focus to the main topic.

The basic requirement of an analytical essay is to write it rationally and logically rather than filling it up with irrelevant details.

Essay writing has become a part of majority of fields today but still only a few people are aware of the various types of essays.

As different types of essays are used to evaluate scholarship applicants, candidates of aptitude tests and college students, being aware of its types has become a requirement to survive in the present world.

Students still having a problem in understanding an essay don’t have to worry, as we are here to guide them.

They can use our write my essay online service and we will write a perfect essay of any type they are in need of.

GIVE YOUR GRADES A BOOST